The doctor ordered "Back to the Future II" and bedrest

I've been sick with a cold. Not any cold, but some super human cold to end all colds. I'm finally feeling better and I've ingested my share of ibuprofen, Sudafed, codeine cough syrup, Tylenol PM, pho, hot tea, home-made soup (thanks Allie), but mostly a bunch of movies. My eyes have been hurting so a lot of the time I just listened to the movies.

Since last Friday I've re-watched (or listened to): Mission Impossible 3, Wedding Crashers, Singles, Batman Begins and watched for the first time: Hitch, Step Brothers, Indiana Jones and the Kingdom of the Crystal Skull, and Nick and Nora's Infinite Playlist. The re-watches were all good to great, the first timers - almost every last one of them horrible. I've learned that when you are sick, go with what you know.

Sequels in general make for great movie watching when you are sick, because plot details don't matter as much and the fact that it's not as good as the original won't matter as much. Plus you have probably already seen it a few times so you can doze off for periods of time and the story still makes sense. 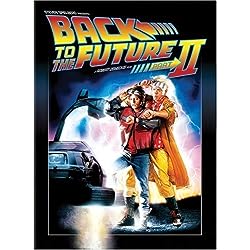 I recommend Back to the Future II or BTTF II as we true fans call it. It's not as good as the first but definitely better than the old West flying train piece of junk that came out after it. Lot's of Biff getting his just desserts and Marty's girlfriend gets upgraded from nameless actress to Elisabeth Shue between BTTF 1 and 2. Not bad! Other things to love about this one mainly appear in the future, Nike self-lacing shoes, Mattel Hover Boards, hover cars, 3-D advertising and a fax machine in every room of the home.

For my money what's better than a movie about the future when being sick essentially puts you in a wormhole to next week anyway.

Try to avoid tense movies like MI3 or The Dark Night, I learned my lesson the hard way. Other recommended sequels would include: Empire Strikes Back or Return of the Jedi.

Roads? Where you're going you don't need roads... Motrin maybe but no roads.